Sometimes NOOBs are entertaining, often they’re useful, but once in a while they are purely pretentious. I’d say that’s the case when the term is very rare in the U.S. and there is an exact or very nearly exact American equivalent. The word used in a tweet by the San Francisco Business Journal and flagged to me by Nancy Friedman certainly qualifies. The word is “hotchpotch” and the American equivalent is “hodgepodge.”

The etymology is complex and interesting. The original English term is “hotchpot,” dating from no later than 1381, and deriving, the OED says, from the “Anglo-Norman and Middle French hochepot (French hochepot ) dish containing a mixture of many ingredients, especially kind of stew made with minced beef or goose and various vegetables (c1214 in Old French).” “Hotchpot” took on metaphorical meaning, as “A confused mixture of disparate things; a medley, a jumble” by 1405, followed five years later by a rhyming version, “hotchpotch,” referring both to the stew and the figurative jumble. “Hotchpot” and “hotchpotch” both acquired yet another continuing meaning, in law, as “The reunion and blending together of properties in order to secure equality of division; bringing into account, esp. on intestacies.”

“Hodgepodge” came on the scene in 1579, according to the OED, from the pen of poet Edmund Spenser. In the Dedication to The Shepherd’s Calendar, “E.K.” decries writers who have found the English language to be insufficient:

“Gallimaufry” is another name for a mishmash, both of food or anything else.

I’m not sure why “hodgepodge” became the preferred American version, but it did, starting in about 1900, as this Google Ngrams Viewer chart illustrates. 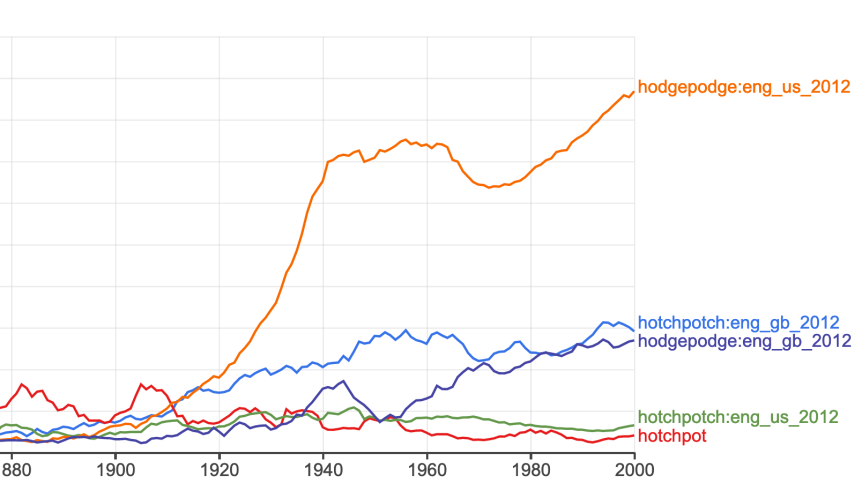 My guess is that the chart actually overstates the frequency of American “hotchpotch.” The New York Times has used it 37 times in its more than 150-year-history, all but a handful coming from British or other foreign speakers or writers. The most recent exception came from a 2002 article about (American) football, noting that the New York Giants had a hotchpotch offensive line.” In 1954, movie critic Bosley Crowther referred to The Golden Coach as having “a spectacularly hotchpotchly cast.”

On the chart, it’s interesting to see that in 1880, “hotchpot” (combined British and American, red line) was the most popular form, while it barely exists today. I take my hat off to the few souls who use it; they are really owning their pretentiousness.