Reader Stuart Semmel sent along a link to a Washington Post article and wondered whether the use of sweets rather than candy in the reference to “the kind of neighbors who can afford a $5 bag of sweets to give to others” was a NOOB.

After reading the relatively short article, I  was ready with an answer: no. In the piece, the word “candy” is used nine times, including twice in the phrase “bag of candy.” Thus I cannot escape the conclusion that the one “bag of sweets” is less a NOOB than a case of elegant variation: H.W. Fowler’s term for writers’ efforts to avoid word repetition by coming up with a variant for the term in question.

Elegant variation is a fixture of the sports pages, where home runs become “circuit clouts” and a second baseman becomes “a fleet-footed second sacker,” but you see it an all sorts of writing, and to my mind, “bag of sweets” is definitely it.

I got a business e-mail the other day (from an American) that started out with a one-word sentence: “Hullo.” The U.S. version, of course, is “hello.” I had always associated hullo with mum, except I sometimes encounter “mum” here, and I’d never seen an American “hullo.” Until now.

“Hullo, Bobbie,” I said. “Hullo, Bertie,” she said. “Hullo, Upjohn,” I said. The correct response to this would have been “Hullo, Wooster”, but he blew up in his lines and merely made a noise like a wolf with its big toe caught in a trap.

Hello (first citation 1827) and hullo (1857) both have the same etymology as the verb holler, according to the OED, as do the older variants hallo (first seen in Dickens, in 1841) and hollo (Shakespeare, Titus Andronicus). Interestingly, an even earlier version is holla, which has recently come back in full force. The most popular definition on Urban Dictionary gives three meanings, the relevant one being, “A word used to acknowledge the presence of a fellow companion.” This example is offered: “Is that mah boy ova there? HOLLAAAAA!” 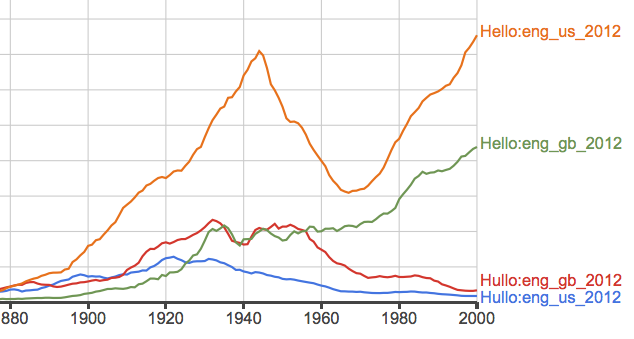 The decline in hullo use on both sides of the Atlantic suggests that my e-mail correspondent’s use of the word was a one-off–about as likely to catch on as the similarly Wodehousian abbreviation for the thing we used to talk on: ‘phone.

The fox-hunting-derived expression go to ground, covered here not long ago, came to mind this morning when I read something President Obama said in an interview with Fox News yesterday:

And, you know, we’ve seen some indications from the Russians as well as the Syrians today, uh, that they may be willing to look at the prospect of getting those weapons under control, perhaps even, uh, international control, and getting them out of there, where they could be vulnerable to use by anybody. And that’s something that we’re going to run to ground over the next couple of days.

(By the way, I assume the Fox intern who transcribed the interview got extra brownie points for ever “uh” he or she could stick in.)According to the OED, “run to ground” is a variant of “go to ground,” both meaning (literally) to burrow into a hole in the earth, or, figuratively, to withdraw from public view or lie low. Something or someone can also be run to the ground, meaning worn out through overuse. Obama seems to have meant something different, more like “explore in every possible way.”

As I noted last week in a post on the Chronicle of Higher Education blog Lingua Franca, one of the distressing aspects the current debate over intervention in Syria is the way it’s led metaphors to run amok, including “red line,” “boots on the ground,” and “shot across the bow.” Now we seem to have come to the stage where metaphors are given new meaning, just because they, uh, sound good.

Listening to a report on NPR the other day by the outstanding food correspondent Allison Aubrey, I heard her utter this sentence:

“It’s a high-protein corn that’s really different to what we’re accustomed to.”

That’s right, not different from or even different than, but different to. Years back, my friend David Friedman, a massive West Ham supporter, had told me this usage was prevalent in U.K. football commentary, and I’d been looking out for U.S. users. Aubrey was the first, so I revved up the databases and hunted for more.

Not much luck. There are plenty of different to‘s in the Corpus of Contemporary American English (COCA), but virtually all of them were either uttered by British-born speakers or writers, or were used in expressions like “it’s different to actually go there.” Going back to 2008, the one exception was this from the Denver Post in 2011: “…the roughly $18 billion 2011-12 budget Republicans voted for is more similar than different to those that Democrat-controlled legislatures have written the past several years.” But it seems likely that the writer used to because of the need to work with the earlier word similar, which takes a to.

So I am going to categorize different to as a Doobious NOOB.

By the way, my search informed me that the British usage had been commented on by Americans for at least 140 years. One example among many was an article called “Errors in the Use of Prepositions,” in an 1873 number of American Educational Monthly. The author, identified as “S.W.W.,” wrote:

English people make a sad mistake in saying “different to” for “ different from.” Here is an example from the London Times: “During Swift’s second residence with Sir William Temple, he had become acquainted with an inmate of Moor Park very different to the accomplished man to whose intellectual pleasures he so largely ministered.”

@PeterSokolowsi of Merriam-Webster reports on Twitter that gallimaufry is, at this moment, the most looked-up word at the company’s website. Why? Because the New York Times’ Maureen Dowd used it in her column yesterday: “Just like the Bushes before him, Romney tried to portray himself as more American than his Democratic opponent. But America’s gallimaufry wasn’t knuckling under to the gentry this time.”

(Dowd NOOBed in her opening line: “It makes sense that Mitt Romney and his advisers are still gobsmacked by the fact that they’re not commandeering the West Wing.”)

The OED’s first meaning for gallimaufry (which is spelled various ways) is culinary, referring to a stew or ragout with various ingredients, but as early as 1551 it took on the meaning “A heterogeneous mixture, a confused jumble, a ridiculous medley,” which is how Dowd uses it, though with a more positive spin than the definition suggests.

A Google Ngram reveals that, except for a puzzling period between about 1875 and 1885, the word has historically been used more in Britain (red line) than the U.S. (blue line):

But I wouldn’t exactly call it a Britishism, Not One-Off or otherwise. It’s just that columnists need to say things in colorful ways, and Dowd is about as colorful as they come.

Faithful reader Cameron directed me to a quotation from an article on MLB.com by Anthony Castrovince (the MLB standing for Major League Baseball):

“Wakefield was a dependable eater of innings who annoyed opponents — not just on the days he pitched, but the day after, for a knuckleballer serves as quite the spanner in the works.”

(Translation, for non-American readers: Tim Wakefield is a pitcher who specializes in a rather unusual, fluttering pitch called the knuckleball. Wakefield himself, while he doesn’t produce spectacular results, has the ability to get his team fairly deep in the game without giving up too many runs: that is, “eat innings.” It is a general truth that, if a team faces a knuckleballer one day, its batters don’t do very well against a conventional pitcher the next day.)

I categorize spanner, meaning wrench (the tool) as a Doobious NOOB–that is, it is never found here–and spanner in the works as an outlier. The OED finds the first use of the latter in P.G. Wodehouse’s 1934 Right Ho, Jeeves: “He should have had sense enough to see that he was throwing a spanner into the works.”

I believe the expression will never achieve wide circulation here–will be used only, as Mr. Castrovince does, as a self-conscious exoticism–because we have a synonymous and, arguably, more adaptable and expressive counterpart: throw a monkey wrench in or into, which can be followed by works, plans, operation, or anything else. The OED reports a use of this by the Chicago Tribune back in 1907: “It should look to them as if he were throwing a monkeywrench into the only market by visiting that Cincinnati circus upon the devoted heads of Kentucky’s best customers.”

When Cameron brought up spanner in the works, it rang a vague bell, originating, I realized, in the title of a 1995 Rod Stewart album. I’d never known what this meant, and so categorized it with similarly mystifying British record names, like “Tea for the Tillerman,” “John Barleycorn Is Dead,” and “Thick as a Brick.” When I mentioned the expression to my wife, she reminded me that John Lennon’s 1965 book was titled A Spaniard in the Works. I had never before gotten the play on words. Good one, John.

A few days ago, the (London) Daily Mail published an article that began:

Olympic legend Michael Johnson says a ‘superior athletic gene’ in the descendants of West African slaves means black American and Caribbean sprinters will command the sport at the London Games.

‘It’s a fact that hasn’t been discussed openly before. It’s a taboo subject in the States but it is what it is. Why shouldn’t we discuss it?’

If you’re American, you will probably be puzzled by (the American) Johnson’s comment that certain people “have dominated athletics finals.” In the U.S., athletics is an all-purpose term, pretty much a fancier and more formal version of sports (sport to you). In the U.K., however, athletics is used as Johnson was quoted as using it: to refer to track, that is, running, events.

I said that Johnson was “quoted as” saying athletics. I bet that he did not actually say it, but rather that the Daily Mail–not known for its journalistic scruples–doctored the quote to make it understandable to readers. Anyone think otherwise?