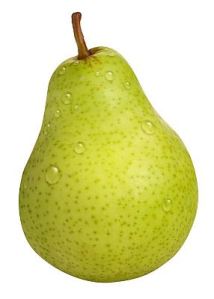 Reader Priscilla Jensen alerts me to this from the November 7 Wall Street Journal: “But [Barack Obama’s] opportunity will quickly go pear-shaped if the bond market loses confidence . . . ”

Unfamiliar with this metaphorical pear-shaped, I went to the OED and was informed that the expression, usually preceded by to go or to turn, is chiefly British and originally RAF slang, and means “to go (badly) wrong, to go awry.” The dictionary offers no etymological explanation as to why the metaphor would have this meaning, and I would be interested in any thoughts on the matter. In any event, the first citation is from a 1983 book called Air War South Atlantic and has telltale quotation marks: “There were two bangs very close together. The whole aircraft shook and things went ‘pear-shaped’ very quickly after that.

The first use of go pear-shaped or went pear-shaped in the Lexis-Nexis database of U.S. newspapers is a 1999 New York Observer column by Phillip Weiss about the Clinton impeachment hearings. He writes:

Eve MacSweeney, an editor at Harper’s Bazaar, sends me an e-mail that says, “couldn’t e you back from england as friend in hospital and everything went pear-shaped.” I call to ask about the phrase. She tells me that “pear-shaped” is the reigning metaphor in England now. Things are going pear-shaped. They say it in the financial district when a stock goes bad. They say it in W11 about a marriage. Ms. MacSweeney says the term resonates because English women are frequently referred to as being pear-shaped, the men in England being buttless, but she and I agree that when the phrase gets here — the land of the aging, big-butted male — it will have wider resonance.

(Weiss’s subsequent aside is relevant to this blog: “I think of when that other Anglicism, ‘at the end of the day,’ came here a few years ago, landing in New York. The House managers use the phrase ‘at the end of the day’ over and over again, summing up their case on the Senate floor. Now we know what the end of the day looks like.” I find, to my shock, that on this blog I have never looked in to at the end of the day. I imagine that’s because, even when I started NOOBs, it was already such a dispiriting cliche on both sides of the Atlantic that I couldn’t bear to write it down several times in a blog post. But I digress.)

The next one Lexis-Nexis hit comes in in 2001, when a reporter for the University of Massachusetts student newspaper wrote, referring to a soccer player’s injury, “That is when it all went pear-shaped.” The phrase pops up now and then in the early and mid-2000s, but really took hold around 2009. There are twenty-eight Lexis-Nexis hits through 2008 and twenty-nine since then, including the testimony of  James Grant, editor of “Grant’s Interest Rate Observer,” to the House of Representatives in September 2012: “Nowadays, when things go pear-shaped, Chairman Bernanke is front and center with broad hints to print enough money or suppress enough prices or inflate enough assets to make us forget our troubles.”

Now go pear-shaped seems to be fully established, especially in  financial and, for some reason, sporting circles. But does it truly resonated in this land of the aging, big-butted male? The jury is still out on that one.