For reasons that are clear when you read the date of this post, I’ve had a lot of time on my hands, part of which I’ve spent by reading Stephen King’s novel The Institute (a page-turner). My NOOBs-dar was struck by two sentences. The first was in the line of dialogue, “I hope you’re sure they’re keeping shtum, as the saying is.” For “shtum,” see this post.

The second was this: “In the event, no gunshot came.” That “in the event” is equivalent to “as it happened” or “as it turned out,” and I had always thought of it as a Britishism. The OED has a couple of (obviously non-American) citations from 1570 and 1612. The next is from British-born Yank Thomas Paine in 1791: “But all his plans deceived him, and in the event became his overthrow.” All the rest are from Britain, up to novelist A.S. Byatt in 2009: “In the event, they were overwhelmed by rain.”

But that’s anecdotal evidence, and I have been having a hard time proving this expression is a Britishism, much less a NOOB. The Corpus of Global Web-Based English, containing about 2 billion words published on the web in 2012-2013, indeed shows higher use of “in the event” in Britain, and especially Ireland, than in the U.S. 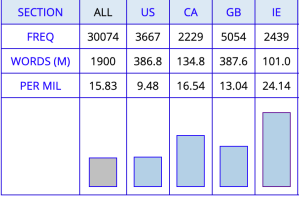 But the trouble is, the vast majority times in every country, “in the event” isn’t used the Stephen King/A.S. Byatt way. Rather it’s “In the event that it rains …” or “in the event of a sellout” or “Anyone participating in the event…,” etc. I have not figured out a way for singling out this particular meaning in GloWbE or any of my other usual suspects, including Google Books or Ngram Viewer and the New York Times. (The Times is worst of all in this investigation because a search for “in the event” turns up every time the paper has used the word “event”; it considers “in” and “the” non-searchworthy minor words.)

So: if anybody has any bright ideas on how to quantify the use of “in the event” meaning “as it turned out” in Britain and the U.S., I am all ears.

Update, later that same day. Two things. First, judging from the comments, I didn’t make it clear enough that I’m not only talking about “in the event” as a standalone phrase, almost always followed by a comma, and not phrases that begin “in the event that” or “in the event of.” For some reason, the latter are common in the U.S. but not the former. Go figure.

More important, I sent my plea out over Twitter and immediately got some great information and suggestions. Writer James Marcus, acting on a hunch, searched for “in the event” and “Henry James” and got this from The Master’s 1903 novella The Beast in the Jungle: “And the touch, in the event, was the face of a fellow-mortal.” Of course, James, though born and bred in the U.S., veered toward Britain in language, manner and eventually residence, in a sort of human heliotropism.

Actual linguist Lynne Murphy gave me a great tip for using GloWbE and the other databases at English-corpora.org. By searching for “. In the event ,” (no quotes), I could eliminate a lot of the noise and produce only cases where the phrase starts a sentence and is followed by a comma. Sure enough, on GloWbE, that produced an even more pronounced frequency in Britain. 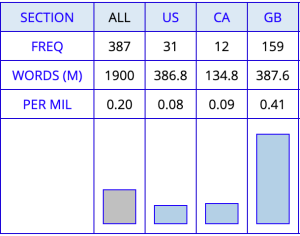 And even the low U.S. figure is deceptively high because a lot of the hits, though mostly published in U.S. journals or websites (one’s from the Daily Mail), were written by British people. For example, this is from an article about soccer (football) from the Seattle Post-Intelligencer: “In the event, the only ‘crack’ was the sound of the ball flying off Mario’s boot into the far corner.” But right there on the page, it says that the author of the article, Simon Moyse, was “Born in London.”

But a handful of the hits are legit American, for example this from the Daily Kos, by Matt Pociask: “In the event, though, the various statesmen who assembled at the Convention in 1787 had a fairly clear mandate for change.” Pociask identifies himself as an “Atlanta area lawyer.” (He may have gotten the lingo at work. On LinkedIn, Pociask says, “I’m currently a claims counsel for Hiscox … a leading specialist insurer rooted in England.”)

Another resource at English-corpora.org is the Corpus of Contemporary American English, which contains 2 billion words published between 1990 and 2019. It yields 71 examples of ” . In the event ,” in that time, again, some of them published in the U.S. but written by English people. But also again, some are legit, including this from a 2019 Slate article about Game of Thrones, by the American military strategist Robert Farley: “In the event , the snowstorm made it difficult for Team Alive to even take note of the weapons, and Team Dead squandered one of its biggest advantages.”

So Stephen King is not alone.