This post marks a Not One-Off Britishisms first. I don’t believe it’s ever previously happened that, while researching American use of a British word or phrase, I came upon an example written by me. The phrase is “full marks.” Merriam-Webster’s online dictionary has these definitions and examples:

1 chiefly British : the highest possible grade on an exam or in a course. “She got full marks for the coursework”… — Lancashire Telegraph

2 chiefly British : due credit or commendation. “Regarding the question of aircraft nomenclature, my pet peeve is commercial airline aircraft. I give the Europeans full marks in this department: Comets, Caravelles and Concordes are above reproach.”— John Ryan

There’s a nice used of the term, sort of half-literal and half-metaphorical, in E.M Forster’s A Room with a View:

In my many years as a student and teacher, starting in 1960, I don’t believe I’ve ever encountered Merriam-Webster’s first meaning. The American equivalent would be “got 100” or “got straight As” or “aced it.” But I found that in years past, it was used here. This is from a 1908 New York Times article about a graduation ceremony at a school “for Immigrant Children”:

The literal meaning fell out of favor in American education but the figurative use shows up in the prose of mid-20th century belle-lettristic sorts, including Times writers like Orville Prescott, Arthur Krock, and Brooks Atkinson, who in a 1947 pan of a Molnar play wrote of the author, “Possibly he should be given full marks for attempting a sublime theme.” 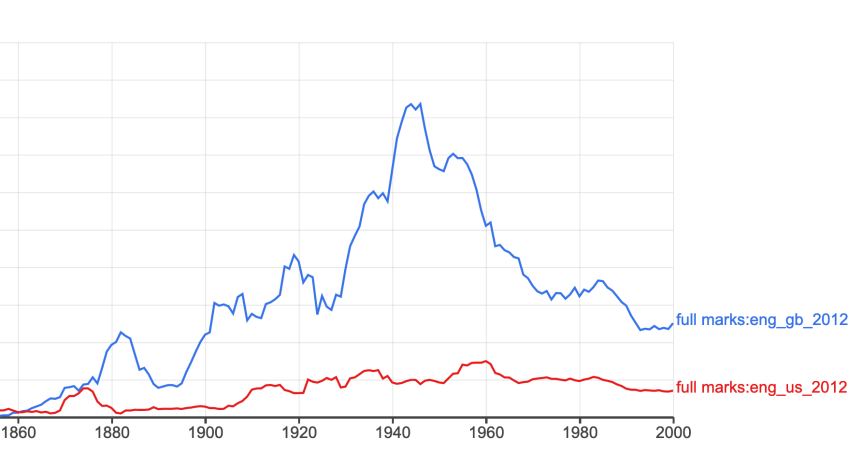 Nowadays, the metaphorical meaning pops up quite a lot in the U.S., including two in sports contexts in just the past few days: The (American) football website Fansided on October 1: “If [Josh] Rosen ever becomes a legitimate starter in the NFL, full marks to him.” And ESPN’s National Hockey League preview on September 30: “Full marks to Niklas Hjalmarsson and Brad Richardson” of the Arizona Coyotes.

There have been twenty-one uses in the Times since 2012, including:

And including an article about comma use listing various mistakes and saying that if the reader spotted them, “give yourself full marks.” The author, I was interested to note, was Ben Yagoda.