A dependable American NOOBS informant, who wishes to remain anonymous, suggests an entry on “Piss off!” which she or he claims to be hearing more and more. This is distinct from “piss off” meaning to annoy, which started as U.S. service slang in World War II, and got picked up in Britain by 1989, according to Green’s Dictionary of Slang. And it’s also distinct from “pissed” meaning drunk, which is a Britishism dating from 1810 and has yet to be picked up in the U.S.–hence, a NOOB in waiting.

Green’s reveals that “piss off” originated in circa the 1920s as a verb meaning “to leave”; a 1959 Kingsley Amis letter notes, “She pissed off at about 9.” “Piss off” as a command is defined by Green’s as “an excl. of rejection, dismissal.” Citations–all from British or Commonwealth sources–date from 1934, with the most recent being from David Mitchell’s Black Swan Green, 2006: “The gypsy kid sat under the cedar sending out piss off waves.” The dictionary doesn’t say so, but it seems to me clearly a euphemism for the saltier “f— off.”

Has “Piss off!” penetrated to the United States? Not wanting to just take my informant’s word for it, I turned to Twitter, specifically the geo-tagging feature in TweetDeck. This allows me to create a column consisting of tweets containing the phrase “piss off” that originated within a 200-kilometer radius of New York City.

You’ll note that the tweet from “Autistic Lady – FEC demon -”  sure doesn’t sound like it originated from the New York vicinity, filled with Britishisms as it is. She subsequently explained: 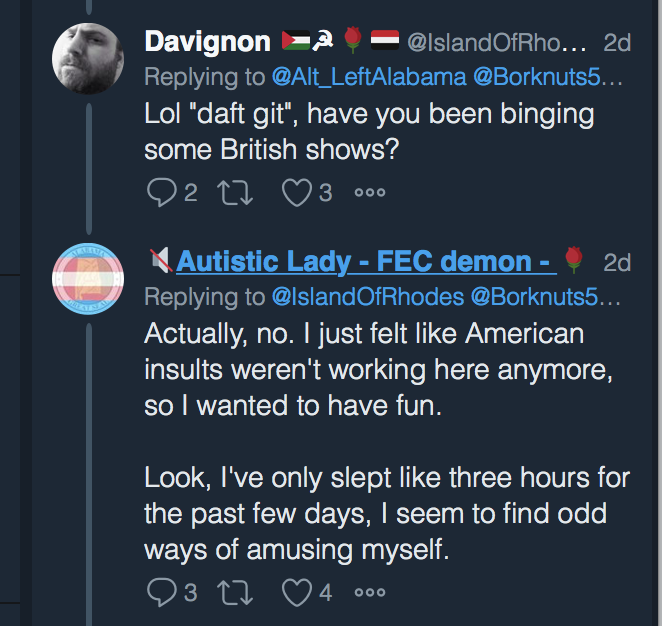