Prompted by some comments to my post on “stand (for election)” to take a deeper look, I find some interesting nuances. To start, “stand” in the sense of put oneself forward for an office dates to at least 1551, according to the OED. For the first couple of centuries, it was always used in reference to a specific position (“Were he to stand for Consull”–Shakespeare, Coriolanus), especially, from the 1700s on, Parliament (“Dr. Thorne intended to stand for the county on the next vacancy”–Trollope). This Google Ngrams chart shows the frequency of that “stand for Parliament” in the Google Books database. 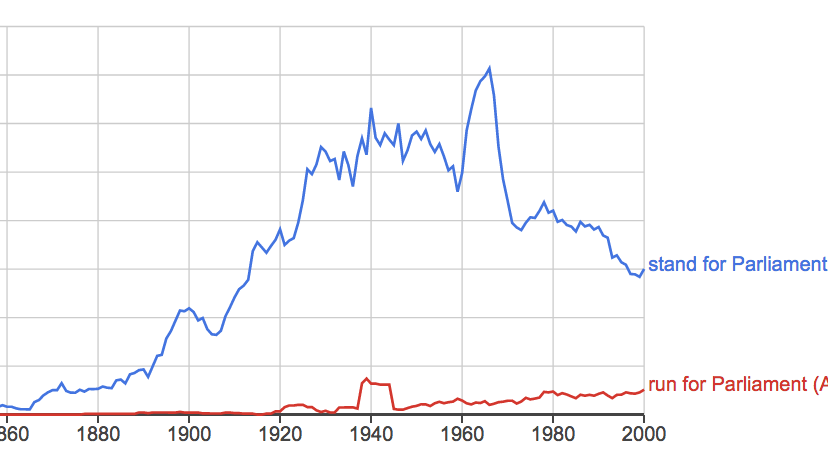 Then the more general “stand for election” popped up, slowly. Google Books contains only two uses of that phrase prior to 1900–one in Connecticut in 1814, the other in South Africa in 1888. Things picked up in the 20th century, as this Google Ngrams chart shows. 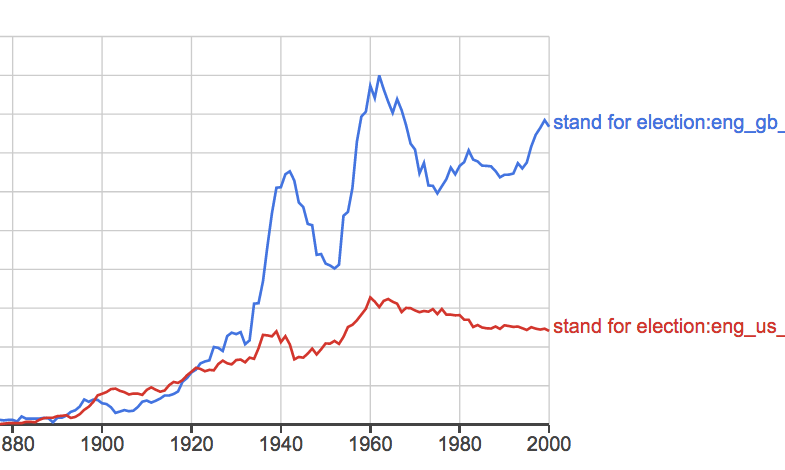 The graph is instructive in terms of this blog’s subject. It shows “stand for election” was used roughly equally in U.S. and British sources until about 1920, when it took off in the Britain and stood still here. And what replaced “stand” in the U.S.? Basically, “run” followed by the name of the office. This Google Ngrams chart shows only American sources. 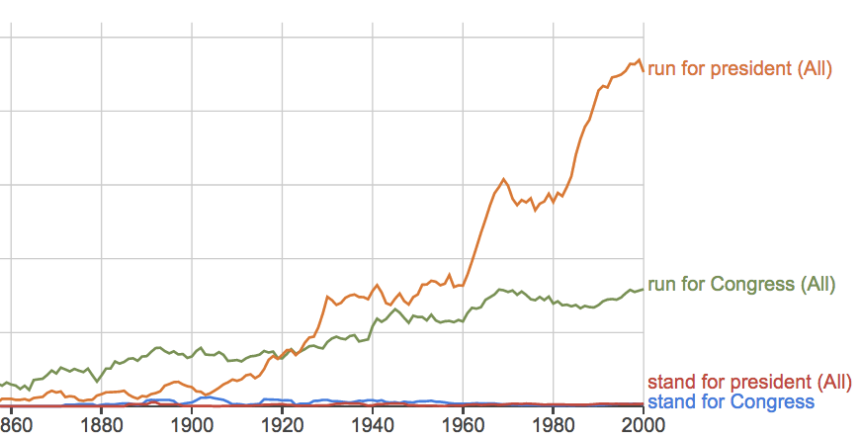 In other words, the phrasing in Rachel Maddow’s statement quoted in the original post–that FDR “stood for president”–had, until then, basically never been used in American English.

I have to admit I was surprised to find “stand for election” as popular in the U.S. as Google Ngrams shows it to still be; certainly, I don’t recall ever coming across it. To try to get some insight, I searched the phrase in the New York Times archives, and got some interesting results. A lot of the hits come from articles about foreign (especially British) elections. The most recent American story came in February 2016 and was about the governing board of the Academy of Motion Picture Arts and Science: “Traditionally, nominees stand for election by the individual branches.” The next one, published a month earlier, was: “Lion Point Capital …has proposed two director candidates, whose names were not released, to stand for election at the company’s annual meeting.”

The next five examples, dating back to 2013, were along the same lines–all referred to people putting themselves forward to boards of trustees or directors. That makes sense because it doesn’t sound quite right to say someone is “running” for such a position.

Incidentally, the other example in the original post, besides Maddow’s, was from an article in the New York Times Magazine by Sasha Chapin. I noted that he’s Canadian and wondered whether “stand for election” is common in that country.

“But here’s a twist: that line was inserted by my editor, an American. Cor blimey!”