On June 16, Twitter CEO Dick Costolo said, “We have things rolling out this fall that I am over the moon about and can’t wait for people to see.” The previous week, race car driver Scott Dixon said he was “over the moon” about winning the Firestone 600.

“Over the moon” is of course a hyperbolically metaphorical way of saying you’re very happy and excited. The first citation in the Oxford English Dictionary is from 1936, Margaret Kennedy, Together & Apart:  “She didn’t know she had a brother and she’s over the moon.” It’s not unfamiliar to Americans, but usage has been primarily British, as this Google Ngram Viewer chart suggests. 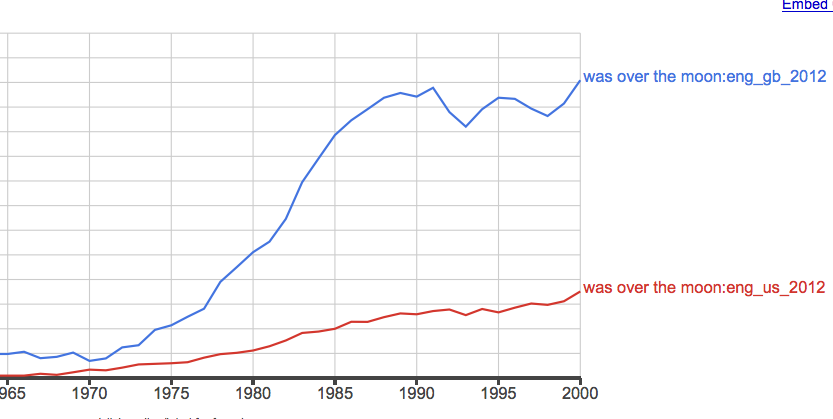 In recent years, it has largely been the province of British or Australian celebrities, when discussing being pregnant or having a child, or athletes, when discussing winning a game. Such uses still yield the most hits in a Google News search, as in a recent quote in Perth Now from an Aussie businessman whose wife is expecting: “’I’m over the moon. It’s the most wonderful thing that’s ever happened to me,’ the proud expectant dad told us exclusively.”

But the Costolo and Dixon quotes suggest “over the moon” may be following the lead of “At the end of the day” and entering U.S. parlance. I’m betting it will.