I originally posted this in the Chronicle of Higher Education’s Lingua Franca blog: 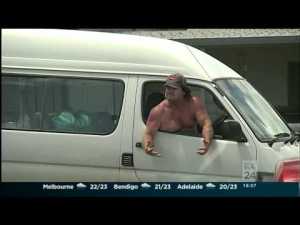 The ABC television network has announced that in 2013 it will air a sitcom called Family Tools. Previously, the show was called Comeback Jack; before that it was called Red Van Man, and before that, it was called White Van Man. And therein lies a tale.

Like many American comedies, including All in the Family, Sanford and Son, and The Office, this one took its premise from a British original, White Van Man. If you are American, that phrase probably means nothing to you. And neither does the much older expression from which it sprang, “man with a van.”

I myself first became aware of the latter when I got an e-mail from a BBC correspondent, Michael Wendling, who was interested in Not One-Off Britishisms, the blog I conduct about British expressions that have become popular in the United States. He observed, “I was in Brooklyn recently and I saw signs for ‘rubbish removal’ and ‘man with a van.’ There was a sex shop called ‘Shag.’”

I was aware of rubbish (what we would call garbage or trash) and Austin Powers had universalized shag, but I’d never come across man with a van. I asked Michael what it meant, and he explained:

A ‘man with a van’ is a person who will move your belongings to your new flat, or take them to the rubbish tip, or any other odd jobs that need a large vehicle and an extra pair of hands. Particularly common in London where there are a lot of people moving and fewer people have cars.  Inevitably the man is Australian, and the van is white (you may have come across the related Britishism, ‘white van man’, a working class male usually employed in some sort of manual labour, avid reader of tabloids and connoisseur of full English breakfasts).

When I looked into the expressions (as how could I not?), I encountered some surprises. One would have presumed man with a van to have originated during the time when vans, as we know them, started to be manufactured—maybe the 1940s? In fact, the Oxford English Dictionary has a definition of van as “A covered vehicle chiefly employed for the conveyance of goods, usually resembling a large wooden box with arched roof and opening from behind,” and locates a first citation in 1829. Man with a van was in circulation by 1876, when an article in The Times noted, “The practice of the firm was to send to customers a man with a van.” And an Australian agricultural journal wrote in 1903: “Where the factory is so situated that a man with a van could collect the cans from the different suppliers, deliver them to the factory, and bring back the empty cans at a small charge the factory should lie supported.”

White van man, meanwhile, was apparently coined by a Times writer called Jonathan Leake, who in 1997 published an article headlined “Number Is Up for White Van Man—Scourge of the Road.” It began:

He is known as White Van Man and is the most feared driver on the road. But he is about to be tamed. Transport watchdogs plan to crack down on the young male van driver who looms in your rearview mirror, comes within feet of your bumper and usually makes obscene gestures until he forces his way past. The phenomenon of White Van Man—a tattooed species often with a cigarette in his mouth, who is prone to flashing his lights as he descends on his prey—has been identified in a report by the Freight Transport Association (FTA). It says his bullying antics have now become a threat to all motorists, and it believes the problem is so serious that a nationwide re-education programme is needed, possibly backed by legislation.

Rupert Murdoch’s tabloid The Sun subsequently ran a regular feature in which a white van man, shown through the window of his vehicle, was interviewed about the issues of the day. The BBC ran a documentary about the phenomenon, and  at least two studies have been devoted to it, one comparing the frequency of bicycles being overtaken on the road by cars and white vans, and the other a seemingly half-serious, half-facetious composite portrait of the species.

When ABC started working up its sitcom, White Van Man was a reasonable working title, but even the dimmest suit could see that it would lack any meaning or resonance for American viewers. ABC cleverly put a post on its Facebook page asking people to weigh in on the alternatives it was considering: Red Van Man, Get Back Jack, Comeback Jack, The Family Tools, and Tool Guys. A surprising 118 people replied, the majority of whom actually took the task seriously. (One who didn’t was the woman who noted, “How about canceled after 3 weeks”). And ABC actually took the counsel of Annette Zaripov-Brand, who wrote, “Family Tools … no ‘The’.”

So will this show be worth watching? The plot description doesn’t fill one with hope:

Mixing family with business is never easy, and Jack Shea (Kyle Bornheimer) is about to learn that lesson the hard way. When Jack’s father, Tony (J.K. Simmons), has a heart attack and is forced to hand over the keys to his beloved handyman business, Jack is eager to finally step up and make his father proud. Unfortunately Jack’s past career efforts have been less than stellar, so everyone seems to be waiting for him to fail. …

Moreover, the online trailer suggests the dominant motif of the show will be staple-gun humor. However, a show about a bunch of neurotic New Yorkers who have to figure out what to do when the fascistic owner of a soup restaurant throws them out wouldn’t have sounded so great, either. So I will give Family Tools a shot.

Meanwhile, I have to find out what a “rubbish tip” is.