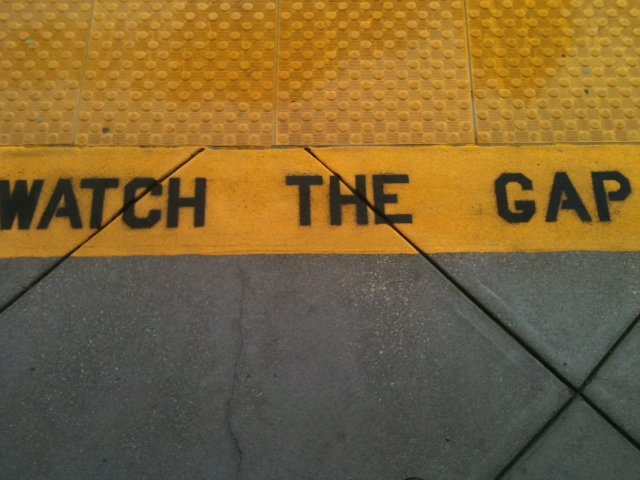 Today I took the above photo of the platform at at the University City, Philadelphia, train station. For some time, I have been noticing “Watch the gap” announcements and signage not only in the Philadelphia commuter train system, but also Amtrak and Metro North, which serves the New York metropolitan area.

The phrase “Mind the gap” is, of course,  intimately connected with the London Underground and has been since 1969, when it was adopted to caution passengers not to step into the space between the train and the platform. Gap isn’t a proper Britishism, I don’t think; it’s just that there isn’t any American counterpart, so the association with the Underground slogan makes it sound British.

Mind very much is a Britishism, so much so that I don’t expect to see it catch on in New York or Philly. However, Seattle–the home of the Bumbershoot Festival–has, according to this Flickr photo, put the slogan on public buses. I don’t exactly understand what the gap is on a bus, so if any Seattle-ites could fill me in, I would appreciate it.