On previous occasions, I’ve addressed Americans using, in various circumstances, the British term “university” rather than “college,” which Americans traditionally use even in reference about institutes of higher learning that indeed are universities. That is, someone who graduated from Pennsylvania State University would say he or she “went to college” there, or “when I was in college.” (To make matters even more complicated, this Penn Stater would, I reckon, refer to “my university” or “the university.”)

Recently, I’ve noticed a spate of Americans not saying “in college” but either “at university” or “in university” (which seems to be a Canadian or Australian favorite). Some examples:

State University of New York Chancellor Kristina M. Johnson: “When I was at university, I was diagnosed with Hodgkin’s disease, a cancer of the lymph system.”

Sarah Karlan, a writer for Buzzfeed “Despite her family losing their home and business during the depression, [Edith] Windsor graduated from high school and would continue on to earn a degree from Temple University. It was at university where she would first fall in love with another woman.”

I’m not sure of Majd’s nationality but here’s a tweet of hers. (And by the way, Lady Gaga went to New York University.) 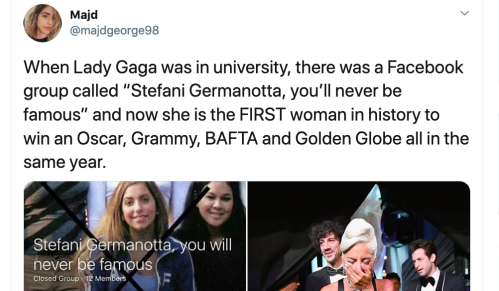 And these tweets all emenated from a 200-mile raadius of New York: