I was informed via Lynne Murphy of this map for an event held yesterday in Portland, Oregon. 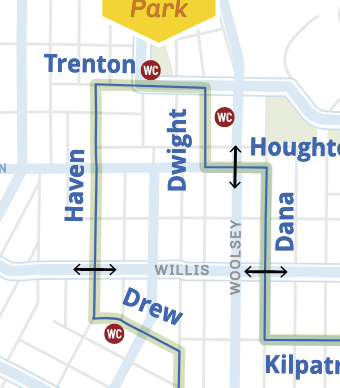 The key at the bottom says that WC (British term for public lavatory, short for “water closet”) indicates “restrooms” (an American term for same), thus effecting a nice trans-Atlantic hybrid.

American WC tends to turn up in special circumstances, as in the Portland map, where the customary symbol for such facilities, a version of this–

–might end up too small to be legible. (Or maybe, Portland being Portland, the binary imagery was viewed as politically incorrect.)

The American company Kontextur uses the term for their range of bathroom-cleaning tools:

And it’s helpful in headlines, where space is at a premium. This 2004 New York Times article is about being stuck on a bathroom-less corporate jet:

WC is useful term, not only in being concise but in having a Goldilocksean just-right level of euphemism, not explicit about its function but, being willing to acknowledge “water,” nowhere near as opaque as “rest room” or “facilities.” I hope it catches on.