The ever-vigilant Nancy Friedman sends along this image from  “an NYC-based clothing company”: 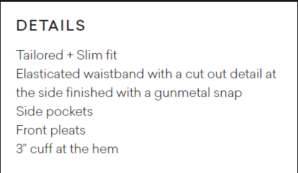 The key bit is the “elasticated” waistband. Nancy notes, “In my experience, ‘elasticated’ is UK, ‘elasticized’ is US.”

She’s definitely right about that. The citations for ‘elasticated’ in the OED are all from British sources, starting from the first, in 1925, from Chamber’s Journal: ” A sense of the joy of power silkened and elasticated.”

(And by the way, the fact that that use is metaphorical suggests that “elasticated” had been around for a while beforehand. And sure enough, Google Books yields many antedates, the first being in an 1845 edition of the Repertory of patent inventions and other discoveries. It’s for innovations in the manufacture and use of “elastic fabrics.”

A Google Ngram Viewer chart shows that use of “elasticated” didn’t pick up until the 1950s, and was far more common in Britain than the U.S. 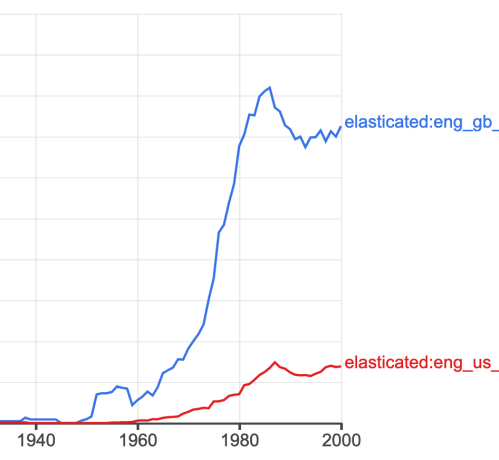 The chart shows some American use–but I wouldn’t count Nancy’s ad as an example. That’s because the clothing company, A Day, according to its website, appears to be more global than New Yorky. The “About” section reports: “As a team, we embrace being international citizens — our founders Meg (yoga teacher) and Nina (former competitive gymnast) were born in Beijing and Frankfurt, eventually connecting in London and moving together to New York.”

The legit American uses of “elasticated” are sparse and specialized enough that I’m going to tag it “On the Radar.” It’s appeared in the New York Times nineteen times, mostly uttered or written by Brits. It’s also appeared mostly in the fashion pages, including in 2014, when (American) Alex Vudela described a “pentagonal polka dot shirt with an elasticated hem, worn with a matching tie and trainers.”

A couple of the Times references are to Tom Stoppard’s 1974 play Travesties, which is based on real-life characters such as James Joyce. Another, lesser-known real-life character, Henry Carr, remembers Joyce working on Ulysses, although, he says, “at that time we were still calling it (I hope memory serves) by its original title, Elasticated Bloomers.” This factoid was pretty clearly made up by Stoppard, yet a Times review of a 1989 revival of the play took it as fact: mentioning the novel and then adding a parenthetical “(or ‘Elasticated Bloomers,’ as it was originally titled).” More recently, someone posted on Twitter in 2016:

The tweet didn’t get any likes, comments, or retweets, so I repeat the query here. Is it true? I hope so, too.

This entry was posted in Commerce, On the radar. Bookmark the permalink.