I always look forward to this time of year because, among other things, Lynne Murphy announces two Words of the Year at her Separated by a Common Language blog: U.S. to U.K. and U.K. to U.S. For 2018, the former is “Mainstream Media,” or MSM.

More to the interest of this blog, the U.K.-to-U.S. word is “whilst.” She graciously mentions that I wrote about the word (which is, of course, a substitute for the traditionally American “while”) in a NOOBs post back in 2011, shortly after I started the blog. But there have been significant developments since then. Lynne quotes an email from another friend of NOOBs, Nancy Friedman:

While standard dictionaries still mark it as “chiefly British,” it’s on the rise among Smart Young Things here in the U.S. who think it sounds “cool” or “refined.” Here’s an example from The Baffler (published in New York), April 6, 2018: “You see, while the violence of financial capitalism and the ever-widening chasm of economic inequality might have something to do with why poor folks get themselves into a tizzy and take to the streets, the true catalyst is that they don’t feel respected whilst being systematically eliminated by the police state, they don’t feel respected whilst performing wage slavery.” This humor piece in McSweeney’s (based in San Francisco), from April 2017, is egalitarian: it uses “while” and “whilst” twice each. And here’s the singer Lana Del Rey— born in Los Angeles, residing in Lake Placid, New York — writing on Instagram in May 2017: “I had complex feelings about spending the weekend dancing whilst watching tensions w North Korea mount.” (Quoted in Rolling Stone)

Lisa Franklin, writer and comedian from New York: “people keep commenting on those comics whilst happily ignoring my jokes about The Flash.”

Halle Kiefer, “comedy writer out of Astoria, New York”: a surreally long, minutely detailed anecdote about a young Madonna auditioning with the Queen of Soul’s “(You Make Me Feel Like) A Natural Woman” whilst living in a crack den”

I’ll add that it’s not just the elite who are saying “whilst.” I used my new favorite TweetDeck tool, the location search, to find “whilst” users within 200 kilometers of a randomly selected U.S. city, St. Louis, and found plenty, who appear to be young things, though not necessarily notably smart (for British readers: clever). 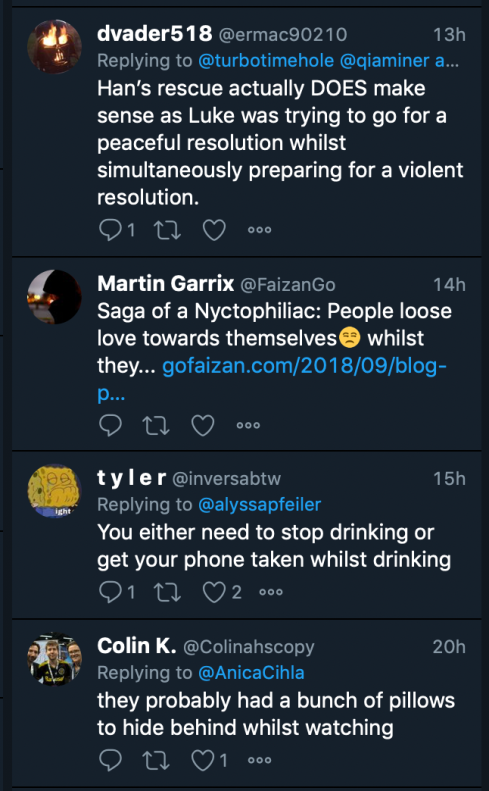 Interestingly, Lynne is interested in the pronunciation of the word. She writes:

Before I started hearing it in British English, I would have read it aloud as ‘willst’. (Dictionaries would have told me otherwise, but I don’t tend to look up pronunciations when I’m reading.) It is pronounced like while with a st on the end. In the US, it seems to mostly have a life in print (does anyone have any nice clips of audio clips of it in American mouths?), whereas in the UK, you hear it too.

I have the sense that I have heard it a fair amount here, always pronounced in the proper, long-“i” way. But I may be kidding myself. I searched the archives of National Public Radio for on-air utterances of the word, and found 246 of them. But they were all spoken by British people going back through 2015, at which point I gave up. Does anyone have evidence that an American has ever said “whilst,” and if so how she or he pronounced it?

Update: On the pronunciation issue, Ben Zimmer has directed me to a remarkable site called Youglish; it allows you to search YouTube videos for specific words or phrases, and narrow them down to U.S., U.K., or Australian speakers. He sent me a link for U.S. “whilst,” which has 364 videos. The categorizing isn’t perfect–the first clip is from a Canadian, and the second and third appear to be from an Australian and a Brit, respectively–but the speaker in the fourth video is from Minnesota, and I listened to enough true-blue Americans to establish that we do indeed say “whilst,” and that we pronounce it the same way the British do.

20 thoughts on ““Whilst” Breaks Through”