I was listening to the NPR radio show “Fresh Air” the other day; Terry Gross’s guest was Daniel Davis, a professor of immunology at the University of Manchester. I was struck by a word Davis used –“quieten.” In fact, a search of the episode’s transcript reveals he used it seven times, for example, “the exact evidence is really that when a person or an animal is stressed, the immune system does quieten down.”

The word felt unfamiliar; plus, I couldn’t tell the difference, if any, from “quiet.” Since Davis is British I suspected it is a Britishism, and I was right. The OED first lists a transitive sense of the verb: “To make quiet (in various senses); to calm, to pacify.” It’s listed in an 1828 book about York County dialect and apparently became popular enough so that someone wrote in the North British Review in 1844, “To ‘quieten’ the children..is not English.” Subsequent citations — all British — belie this assertion.

The definition for the intransitive sense — the one used by Dr. Davis — is “To become quiet (in various senses). Frequently with down.” The first citation, from 1890, and all subsequent ones are British, except this from Pissing in the Snow, and other Ozark Folktales (1976): “When things finally quietened down, the folks figured that the neighbor boys must have set off some fireworks under the bed.” The word also shows up in Whatever it was that was in the house, I quieten ’em down.” The word also shows up in The Frost Haint of ‘Possum Hollow and Other Ozark Tales (2008), by Alan Lance Andersen, so it does seem to be a thing in the Ozarks, a hilly region in the American South.

As for the difference between “quiet” and “quieten,” the OED definitions are pretty much the same. For the intransitive sense of “quiet,” it’s: “Now chiefly N. Amer. To become quiet; to quieten. Frequently with down.”

Outside of the Ozarks, “quieten” is pretty uncommon here, hence the “On the Radar” designation. It has been used eight times in the New York Times since 2010 but it turns out on seven of those occasions, the writer or the person being quoted isn’t from America. The eighth example is from an essay about the photographer Robert Adams by Teju Cole: “You are likely to feel your breath getting calmer and your senses quietened.” But even Cole, I discover, was born in Michigan to parents from Nigeria.

This chart from the Corpus of Global Web-Based English, showing use of “quieten” and its derivatives (“quietens,” “quietened,” etc.)  shows a bit more frequency in the U.S., but still lagging well behind Great Britain, Ireland, Australia, and New Zealand. 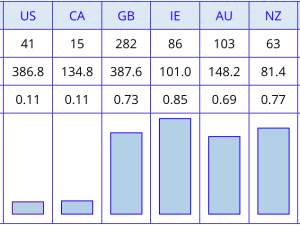 One of the 41 American uses is this sentence from a comment to a 2011 Huffington Post article: “Even if the sun were to quieten down appreciably for the rest of this century, it would still be business as usual for global warming.”

Intransitive “quieten” strikes me as a potentially useful addition to American English.  “Quiets down” is fine, but saying that someone merely “quiets” sounds sort of naked; it could use an extra syllable. So I expect eventually to see more of “quieten” on these shores.