The ever-observant Jan Freeman sends along a quote from (Syracuse-born) Daniel Dezner in a Washington Post essay: “When [people associated with the Foundation for the Defense of Democracy] try to rubbish everyone else’s expertise, however, they only highlight their own intellectual inadequacies.”

This blog has covered the noun, which is the common British term for Americans’ “garbage” or “trash” — both metaphorical and literal — and noted that literal “rubbish” has pockets of popularity in Massachusetts and around Philadelphia. The OED defines the verb as “To disparage, criticize severely, pour scorn on” and notes it originated in Australia and New Zealand. The first citation is from a 1953 Australian novel, Riverslake: “If Verity was going to tramp [that is, dismiss from employment or sack] you for burning the tucker [that is, food] ..he would have rubbished you long before this.”

As the Google Books Ngram Viewer chart below shows, the verb started catching on in Britain in the 1980s, but is still very rare in the U.S., making rubbish the verb an outlier: 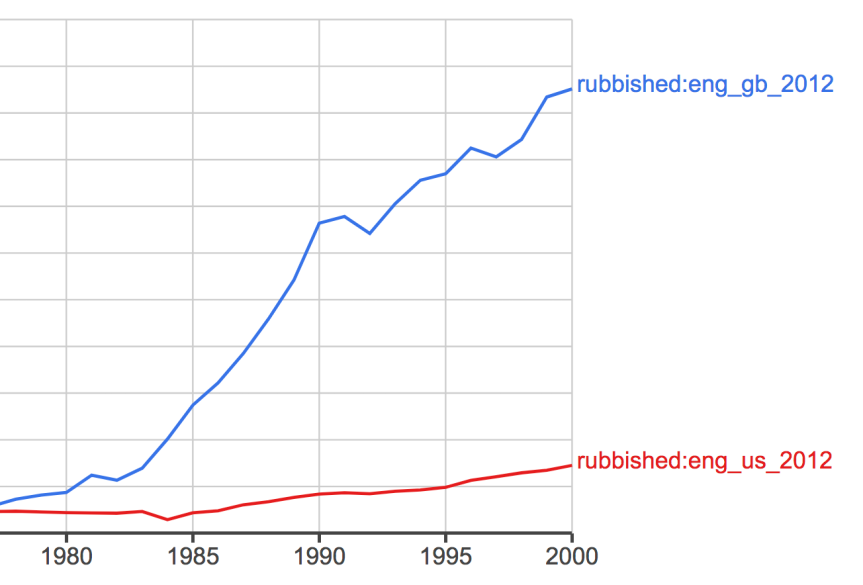