First off, I never expect to see pudding widely used in U.S. to mean “dessert,” both because dessert is too entrenched and because pudding has a such a specific meaning here (“a thick, soft dessert, typically containing flour or some other thickener, milk, eggs, a flavoring, and sweetener”–dictionary.com).

That said, there is room (as is always the case) for ironic, self-conscious use, as Jason Diamond (@imjasondiamond) just observed on Twitter: 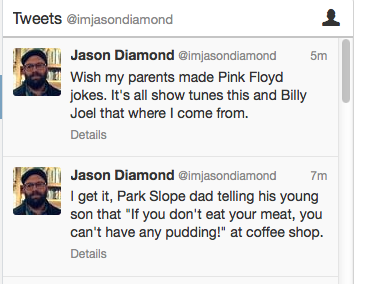 I confess I didn’t get the reference (never fancied Pink Floyd) so had to consult Wikipedia, where I found this under the entry for the song “Another Brick in the Wall”:

The song also features a group of school children for lead vocals in the second verse: as the song ends, the sounds of a school yard are heard, along with the teacher (portrayed as a Scotsman) who continues to lord it over the children’s lives by shouting such things as “Wrong! Do it again!”, and “If you don’t eat yer meat, you can’t have any pudding! How can you have any pudding if you don’t eat yer meat?!”, and “You! Yes! You behind the bikesheds! Stand still, laddie!”, all of it dissolving into the dull drone of a phone ringing and ending with a deep sigh

This entry was posted in Food and drinks. Bookmark the permalink.