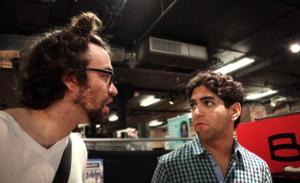 Great piece in Slate by Justin Peters, who decided to try out as many as he could of the bizarre trends sanctified by the New York Times Style section. He managed to do seven of them, including wearing his hair in a man bun, shaving his pubic hair, and, yes, filling his vocabulary with Britishisms. Peters writes:

“What’s up?” “You the man.” “Take it easy.” I use these slang phrases all the time, which is one of the top five reasons I’ve never been invited back to the Yale Club. According to the Times, British slang is the only slang that a trendy American ought to use: “Snippets of British vernacular—‘cheers’ as a thank you, ‘brilliant’ as an affirmative, ‘loo’ as a bathroom—that were until recently as rare as steak and kidney pie on these shores are cropping up in the daily speech of Americans (particularly, New Yorkers) of the taste-making set who often have no more direct tie to Britain than an affinity for Downton Abbey,” the NYT’s Alex Williams writes.

I was in England earlier this year, and though I spent most of my time being jetlagged and avoiding their hideous breakfasts, I did pick up some slang—words like lorry, as in “I would rather be hit by a lorry than eat another English breakfast.” So I figured this would be easy. I boned up on my Britishisms by rereading Brideshead Revisited and consulting the Wikipedia entry on British slang. When Hurricane Sandy knocked out the electricity, I couldn’t hold it in any longer. “Well, this is all to cock!” I cried.

“Your cock?” my wife said

“It’s. All. To. Cock!” I said again, gesturing emphatically.