The verb has several distinct meanings, one of which (1)–to misbehave–is American in origin. Distinctly British (2), on the other hand, is the sense it was used in the 1939 propaganda poster “Keep Calm and Carry On”–that is, to persist in the face of obstacles. The Oxford English Dictionary tells us this originated as a nautical variation on “stay the course.” The OED quotes a 1909 newspaper (which was partial to quotation marks): “‘Carry on!’ is a word they have in the Navy. It is the ‘great word’ of the Service.‥ To-morrow the workaday life of the Fleet begins again, and the word will be, ‘Carry on!’” Familiar on both sides of the Atlantic, I reckon, is the notion (3) of carrying on, or maintaining, a legacy or tradition. 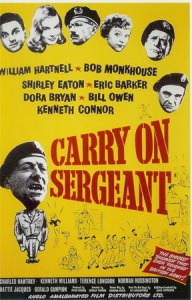 The NOOB is a fourth carry on meaning, more or less, to continue: either as an auxiliary verb (Please carry on working) or by itself (Carry on with your work). The American vernacular equivalent is keep on; Bob Dylan sings of a time when “All I knew how to do was to keep on keepin’ on.” British movie comedy Carry On Sergeant (1958) and its twenty-eight sequels cleverly packed meanings 1, 2 and 4 into the title.

In recent years, Americans have grown mighty partial to carry on 4. I’m spoiled for choice for examples and will just cite today’s (Columbia) Missourian, where a columnist writes, “these people have such a high opinion of themselves that I wasn’t certain we would be allowed to carry on with the rest of our lives without their permission.”

I am also picking up intriguing signals that meaning 3, the stiff upper lip deal, is getting some traction on these shores. Yesterday’s Washington Post had the headline: “Occupy DC Protesters Vow to Carry On Despite Camping Regulations.” And in a profile of runner Michael Pistorius in the 18 January 2012 New York Times, Michael Sokolove writes, “Some of the equipment is clamped to an exterior wall of the garage, opposite an uncovered patio; when it rains, athletes just carry on and get soaked.”