Coined through onomatopoeic metonymy (approximating the sound telephones used to make), and appeared surprisingly soon after the phone’s invention. First use in the OED is from Punch in 1880: “For you upon them both may frown, And say that you are shocked, or May knock the Secretary down, And then ring up the Doctor.”

That is a verb form, meaning “to place a phone call to”; American equivalents are call, call up, or phone. The noun form give (someone) a ring appears roughly the same time. 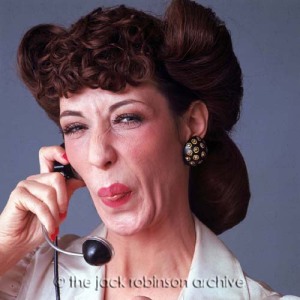 Google Ngram shows interesting patterns in the various forms in British and American English. For one thing, the phrase give me a ring has historically been about equally popular in Britain and the U.S. Currently, following a three-decade upswing, it shows significantly more frequent use here. We also will frequently say something like, “I answered on the fourth ring”–notwithstanding, of course, that telephones don’t make ring-like sounds anymore. And who can forget Ernestine’s “One ringy dingy, two ringy dingies…”?

Verb forms are still more frequent in the U.K. although, typically for a NOOB, U.S. use has spiked since 1990.

The British verb use is more complicated and interesting. The chart below shows British usage of “ring me up” (blue) and “ring me” (red) between 1900 and 2008. Up until about 1940, hardly said merely “ring me”–the phrase had to be “ring me up.” (The OED’s first cite for the up-less ring is 1930) The short form achieved equal popularity around 1980, and currently is used about twice as often. My hypothesis is that ring up sounds to British ears like a stage caricature of the way they talk, so they are in the process of rejecting it–kind of like “telly” or “I say, old boy.”

Another form, still far more popular in U.K. than U.S. is ring off, equivalent to the (anachronistic) American hang up. My Facebook friend Scott Huler mentioned to me coming across this verb phrase in a suspense novel by Lawrence Block. I Googled the author’s name and “rang off” and was presented in at least eight novels in which Block had used the phrase, including this from this year’s “A Drop of the Hard Stuff”: “The phone rang twice, and I rang off before she could answer. I called Greg. The machine picked up, and I rang off.”
A day later, an investor rang him, inquiring about increasing his share of the partnership. (New York Times, November 12, 1989)/I rang him one recent overcast morning to talk about Canta Lechuza, the album of pop songs he’s recorded as Helado Negro (or “Black Ice Cream” in Spanish), which is out today on Asthmatic Kitty.(Village Voice, May 10, 2011)