My first thought was that I had misheard. I was watching a scene in the film “Saving Mr. Banks” where Walt Disney, played by Tom Hanks, is giving a tour of Disneyland to P.L. Travers (Emma Thompson), the author of Mary Poppins, which he would dearly love to film. What I seemed to have heard didn’t make sense to me. But a tweet from @NickyD pointed out the same thing and directed me to the movie’s screenplay. That document confirms that Disney tells Travers, “In Adventureland there is a tree–this is a fun fact. A titbit … ”

Then Travers interrupts and corrects him: “Tidbit.”

The surprising thing isn’t that Travers would presume to correct the great Disney. According to the film, that is the very core of her character. Rather, it is an apparent reversal of the characters’ presumed position on the corrected point. I had thought of titbit as both a Britishism and the original form of the expression, and tidbit as a predominately American corruption.

The OED and Google Ngram Viewer gave me some nuance. The first use cited in the OED comes from 1649, is British, and is in fact tidbit, spelled a little differently: “A tyd bit, i.e. a speciall morsell reserved to eat at last.” The first titbit (also British) appears in 1697 and the last, from T.A. Trollope, in 1887: “During the singing of the well-known tit-bits of any opera.”

Ngram Viewer gives a sense of the popularity of the variants in the two countries: 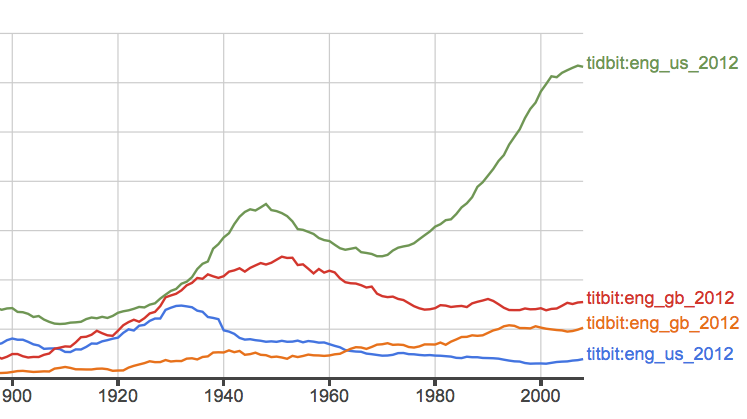 The “Mr. Banks” scene takes place in 1961, at which point, according to Google, tidbit was indeed the favored version in American English and titbit in British English. Now, titbit was still relatively common in AmE until beginning a steady decline in around 1930. (Presumably, that coincided with the rise to prominence of the slang tit, referring to a [usually woman’s] breast, making titbit seem improper, albeit unfairly.  British titbit began a decline of its own commencing in around 1950, possibly because by that point the anatomical  tit had crossed the Atlantic.) So it’s possible that Disney, who was born in 1901 to an Irish-Canadian father, would indeed have used the term. But that seems far too convoluted a linguistic possibility for this film to make note of.

IMDB tells me that one of the screenwriters of the film, Kelly Marcel, is British, and the other, Sue Smith, is Australian, as was Travers. And it would seem that the only plausibility for the anomaly is the Australian connection. Is it the case that tidbit was and is favored in Oz, to the extent that Aussies would think of titbit as an American corruption? I await wisdom from NOOB readers Down Under.