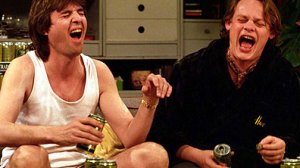 Adj. Immature in the ways young men are immature. A lad (or laddie) magazine is a publication, such as Maxim, nicely described on urbandictionary.com as “catering to oversexed braindead morons and featuring double-extra-soft porn (no actual nudity), gadgets, sports, cars and beer.” Google Ngram. Girls may find this band icky, and parents may wish it had some manners, but Blink 182 showers its fans with laddish love. (Ann Powers, New York Times, June 18, 1999)/And shame on us, really, for not being more on top of our buzz and getting the inside track on James Blake, but The Vaccines were really great – in a laddish, London’s Strokes kind of way – even if they did only play four songs. Hartford Advocate, March 17, 2011)